Concerts and Talks with Bant Mag.

You need to register for the events that will take place on Zoom platform. 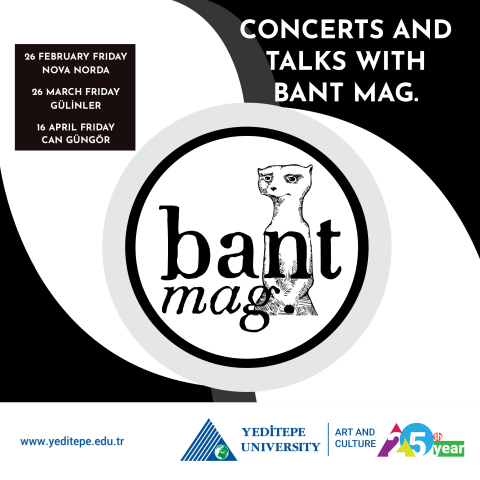 Concerts and Talks with Bant Mag.

You need to register for the events that will take place on Zoom platform.

Alumni of Boğaziçi University’s Sociology + Movie department; musician, advertiser and media specialist, Nova Norda left her corporate career with his single “Çıktım Bi Yola”, released in February 2018, and made a decisive start to her music career. Rising rapidly with her songs, colorful personality and her strong communication with her listeners in a short period of time, she released “Dinozorlar” and “Boşver!” singles with a month in between. With her song “Varım” released in September 2018, she gained a large popularity and she also became a must-have for all festivals. She managed to meet with her audiences all around Turkey with her concerts in a variety of cities and organizations. She released another single, “Beni Biraz” in November 2018, which presented us with her melancholic side, and immediately, she released acoustic versions of “Varım” and “Dinozorlar”, which were loved all around.

Touring around Turkey with festivals, Nova released “Zor” and “Kuzeye Kaç!” and later, she released “Kim Üzdü Seni”, which is a song that is significantly different with its sound and musical identity and in which she talks about loving unconditionally. This song broke her long silence and she continues to meet her listeners in concerts and festivals all around without stopping.

First appeared with the band Büyük Ev Ablukada and got critical acclaim with her project heranherşeyolabilir, which combines music and performing arts, as well as won our hearts after all with her solo performances, Gülinler is now preparing for her first album that everyone is waiting for. Releasing songs called “Teker Teker” and “Hayatım Yıkılmış Sarayım” in 2020, Gülinler is able to combine a variety of genres into her songs with Mert “Aslan” Uçer’s production touches.

Noticed with his own compositions and arrangements for other musicians, Can Güngör released his first solo album, Silik Düşler, in 2015 under Olmadı Kaçarız Plakçılık label. With his personal stories made into songs, simple style and innovative arrangements, the album made into the best of lists of the year, and in the next year, his single “Yalnız Ölmek” followed with leading the “Turkey’s Viral 50” list on Spotify. Güngör’s album of “Sular Dar” which consists of 15 songs that came after a long production period was released in 2020. For his album, Güngör says “It aims to reach a variety of musical styles with lyrical compositions, forms, arrangements and orchestration”.