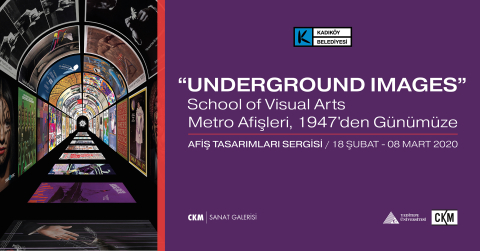 Yeditepe University Faculty of Fine Arts Graphic Design Department introduces the School of Visual Arts Underground Images Poster Exhibition to Turkish designers and students, which is a selection of posters designed by SVA members from 1947 to be exhibited through the New York City subway system.

The exhibition, which includes works by legendary designers such as Ivan Chermayeff, Milton Glaser, George Tscherny, Mirko Ilić, designers of the School of Visual Arts, one of the most influential art communities in the World, has been exhibited 47 times worldwide.

Underground Images, hosted by Yeditepe University and CKM is offering an invaluable opportunity to encounter in the design field…

We are waiting for all arts lovers.

Design From Right To The Left

Design From Neo-Nazis To Design From The Progressive Groups Based Mostly On The Design Of Dissent Book.

Teaching at the School of Visual Arts, New York

Awards And Honors Include

Mirko Ilić was born in Bosnia.

In Europe, he drew comics, illustrations, and art-directed posters, books, and record covers. When he arrived in the U.S. he became the art director of Time Magazine International Edition. Later he became art director of the Op-Ed pages of the New York Times. In 1995 he established his firm Mirko Ilić Corp. His company designs for a wide range of clients, from pro bono organizations to the high luxury hospitality clients.

For his work he received numerous awards and is in collections of institutions such as Smithsonian Museum and MoMA, New York.

Mirko is the co-author of several books with Steve Heller, including Genius Moves: 100 Icons of Graphic Design, Handwritten, The Anatomy of Design, Stop Think Go Do, Lettering Large, and Presenting Shakespeare. With Milton Glaser he co-wrote The Design of Dissent.

He also organizes and curates shows and lectures around the world.