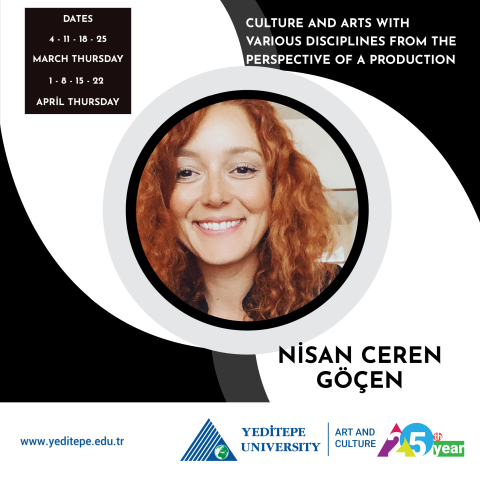 Nisan Ceren Göçen is a producer for about 20 years, mostly in the field of Performance Arts. With Krek, of which she is a shareholder and producer, she presented a lot of award-winning plays. She gave lectures on Management of Culture and Arts in Bilgi University and spoke in many panels including those of İKSV and British Council, as well as organized workshops. She participated in international festivals such as Bonn Biennial, Wiesbaden Theatre Festival, Strasbourg Film Festival, Edinburgh Film Festival and Heidelberg Festival. In 2010, she took the stage with the plays she produced in Paris Odéon Theatre and she was invited as a jury member to British Total Theatre Awards within the scope of Edinburgh Fringe Festival. She took up the co-production of Kürk Mantolu Madonna (Madonna in a Fur Coat) and Arzu Tramvayı (A Streetcar Named Desire). As KREK in 2018, with her play Dünyada Karşılaşmış Gibi (Like Meeting on Earth), she was awarded with Cevat Fehmi Başkut Special Award (Berkun Oya), Actor of the Year (Öner Erkan) and Best Play of the Year in 2019 Afife Theatre Awards, as well as Best Play of the year in Theatre Critics Association Awards and Ensemble of the Year in Direklerarası Audience Awards. She is the producer of Alice Musical, which is the greatest production of Turkey and awarded Haldun Dormen Special Award in Afife Theatre Awards. With her plays called “Terk” and “Evlat”, she made her 2019-2020 season premiere. She was a spokeswoman in important conferences of the city such as Beyond 24 and Marka 2018. She is the founding partner of “Podacto” project and the company which she is a shareholder of, Krek Film, is one of the producers of “Bir Başkadır” (Ethos) series that is made for Netflix and started to be streamed in 2020.

The broadcast link will be sent via e-mail to registered participants automatically.